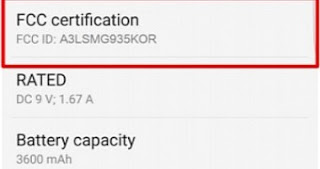 Samsung has learned from its past mistakes and now hopes to redeem itself in the eyes of the fans with this year’s flagship, the Galaxy S7.

One of the drawbacks of the Galaxy S6’s, is the relatively small capacity and non-removable battery, it can probably be addressed in the next Galaxy S smartphone.

Although the information has not yet been confirmed by the South Korean company, we have evidence that the Galaxy S7 edge will be powered by a 3600 mAh battery.

Both the Galaxy S7 and Galaxy S7 edge were recently certified by FCC (Federal Communications Commission), but the list of the documents filed with the Regulatory Commission for the larger model features a very special screenshot.

The Galaxy S7 edge screenshot shows the battery information, such as status, level, FCC certification, and capacity. It appears that the Samsung Galaxy S7 Edge will indeed be a 3600 mAh battery, which is said to have quickly pack on charging technology.

A 3000 mAh battery for Galaxy S7?
Unfortunately, Samsung Galaxy S7 documents filed to FCC do not include such a screenshot, so we are unable to confirm whether the smartphone will come with a 3000 mAh.
Another thing that Samsung fans might be interested in is the fact that neither will come with removable batteries.

Due to the glass-lined design, Samsung has decided not to include removable batteries inside the Galaxy S7 and S7 edge, but it is rumored that the users will be able to replace them with authorized services.
There is also the issue of the microSD card but Samsung seems to have solved it, by including hybrid dual-SIM support, which will allow you choose from adding an SD memory card or a second SIM.

So, there are a lot of changes that Samsung plans for the Galaxy S7, so many features not included in the previous flagship will make a comeback. But let’s see what innovations will introduce the smartphone us (if any).