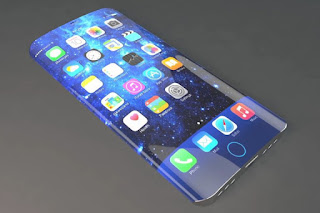 iPhone 7 has not been launched yet , but the concepts in messages about the upcoming iPhone will not be stopped. iPhone 7 will come this year as expected , while the iPhone 8 is expected to be launched in 2017.

Apple Insider stated note -which is obtained from investors that, “Apple has plans to introduce a new high-end iPhone model in 2017, that sports a curved glass case and 5.8 – inch AMOLED display.”

The upcoming iPhone is expected to come with wireless charging supportand all new biometric recognition technology like iris/face scanning. Also, Apple recently purchased facial recognition specialist “Emotient” and real time 3D rendering “Faceshift”. The note also mentions KGI analyst, Ming Chi Kuo, he says that the new iPhone’s design will be similar to as that of the iPhone 4/4S, with curved panels on the front and rear of the device.

Kuo believes that Apple will select a glass as it is convenient to mould and it enables thin light form factor designs including with the other material options (Plastic & Ceramic).

The note also states, “Kuo belives that 5.8 inch variant will replace the position of the current 5.5 inch TFT LCD model, however if Apple is impotent to acquire AMOLED supply, it can be a high end tagline on its upcoming iPhone in 2017”.

It will be really a distinguishable change in 2017’s iPhone. As we know that the Apple’s one flagship phone is having 5.5 inch size, while as iPhone 8 is expected to have 5.8 inch screen, which will be the major change.

Earlier, it was rumored that Apple was testing OLED iPhone displays from Samsung. Due to lack of stock, iPhones may come with curved AMOLED displays by the year 2017.